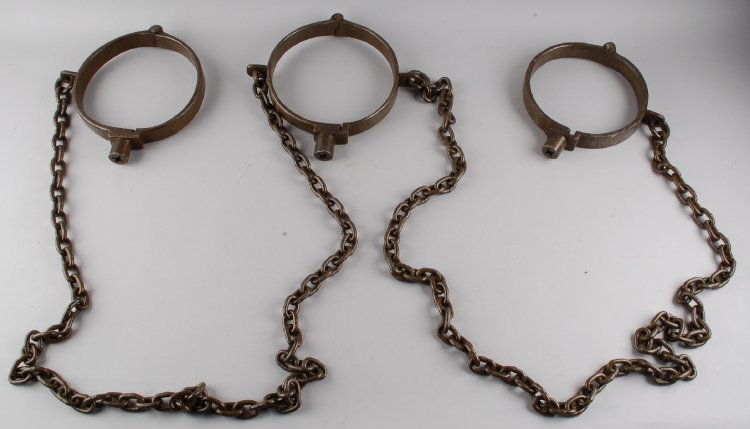 This European iron slave chain was used to chain three slaves together. Chains of this type were often sourced and manufactured in Britain and then used in different parts of the empire. This chain was discovered in Ghana in 1937.

This letter was published in a Gentleman's Magazine in 1740 and it petitioned readers to fight for the abolition of the slave trade.

This newspaper article recounts petitions before Parliament in support of the slave trade in 1789. One petition from Liverpool contains signatures from industrial workers and tradesmen whose work is supported by slavery and the slave trade. 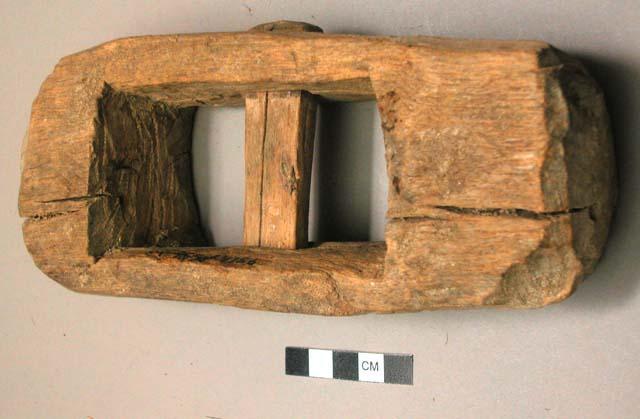 These wooden Umbundu slave shackles would have been used by African lords in Western Africa to transport dependents for sale to European traders on the coast. 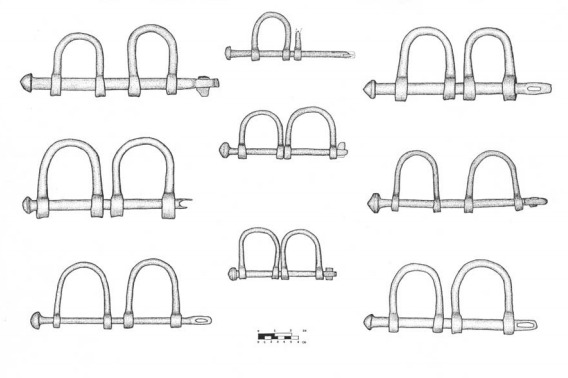 This image illustrates bilboes recovered from the Henrietta Marie, a slave ship that sank off the coast of Florida in 1701. These relics help historians recreate the conditions slaves faced during their journey across the Atlantic to be sold in the American colonies

The slave shackle was one of the fundamental tools for control in the West African slave trade and remains a lasting symbol of the economic exploitation by Europeans in the region. The shackles in this exhibit tell a story of violence, oppression, and inhumanity that are inexorably tied to the history of colonialism on Africa’s Atlantic coast. Furthermore, these items speak to the vastness and interconnectedness of such a colonial system because the way in which they were used, made, and developed demonstrate the centrality of slavery and the slave trade to histories in all corners of the Atlantic World. The exhibit features three sets of shackles: a wooden Umbundu shackle found in modern-day Angola, an iron three-man neck chain found in Ghana, and a series of iron bilboes recovered in the Florida Keys from the shipwrecked Henrietta Marie. Each item reveals the effects of the African slave trade on a different part of the colonial world and the enormous impact of slavery on life in the 18th century.

The European-made slave chain is the image that most contemporary readers associate with slavery and the slave trade. This iron chain, which was used to attach three slaves to each other, illustrates the incredibly inhumane practices of leading African men and women throughout West Africa while chained together to prevent escape. It also demonstrates the interconnectedness of the slave trade and British industry. The iron used to make this chain would likely have been mined in England or Scotland and then forged in a slave port such as Bristol or Liverpool, and shipping reports show the transport of both slaves and iron between Britain and Senegal.[1] Even in the 18th Century, British merchants and business owners recognized the centrality of slavery in the economic development of the British Empire. A 1740 “Letter to the Guinea Traders &co.” in support of abolition alludes to a common understanding that slavery was at the core of the British mercantile system. It admits that some people believe “if you deal in Linnen Checks or Cotton Goods, or anything sent abroad for the Use of the Negroes, you are an Encourager of the Guinea trade.”[2] The mining and forging of iron for slave shackles could very well be included in this list of supporting industries. Pro-slave trade advocates also cited links between slavery and other early forms of manufacturing. A 1789 pro-slavery petition before Parliament included names of Liverpool merchants, planters, iron manufacturers, joiners, coopers, rope-makers, and shipwrights.[3] The iron slave chain ties slavery and oppression to the birth of British industry not only because slaves provided much of the labor to support the capitalist system but also because the maintenance and expansion of the slave system stimulated secondary trades throughout Europe.

The slave trade not only created vast changes in Europe, but also penetrated deep into the African continent. While European contact was largely limited to the African coastline and river deltas in the 18th century, the wooden Umbundu shackles reveal the way in which the trade created a vast ripple effect that devastated societies far beyond direct European control. The shackles complicate the binary Euro-African story of slavery by revealing the way in which different African leaders participated in the slave trade. In his book Way of Death, Joseph Calder Miller frames the choice of African lords to sell captured dependents for export as a carefully constructed choice to promote dependency and political consolidation. He argues that after the arrival of the Portuguese, imported European goods became the greatest tool for power, status, and political dominance in West Africa, and it became socially and economically strategic for African leaders to sell dependents in exchange for them.[4] The arrival of slave traders fundamentally altered the balance of trade in West Africa and the most effective means of expanding political control, and changed the local economy and society as drastically as it did in Europe.

The bilboes recovered from the shipwrecked Henrietta Marie reveal the mechanism by which slave traders transported their human goods across the Atlantic. The ankle fetters that bound slaves during the transatlantic trade reveal the physical and psychological means of control that sustained white superiority, particularly in situations of close proximity. Divers recovered evidence of enough bilboes to hold 160 slaves on the vessel, which illustrates the horrifying conditions in which slaves were forced to stand for days on end and held packed together in the ship’s hold.[5] The bilbo made it possible for a small number of white captors to circulate a massive number of black slaves throughout the Atlantic World. The wreck, which was discovered off the coast of the Florida Keys, provides linkages between the African coast and the American colonies that it supplied with labor.

The bilboes from the Henrietta Marie, like the iron chain and the Umbundu shackles, place the West African coast at the center of the colonial system as the driver of industrial development, reorganizer of traditional African society, and the heart of Atlantic trade. The shackles suggest that in many ways, the success of the British mercantile system, including the development of its American colonies, was built around the capture and transport of African slaves.

[2] “A Letter to the Gentlemen Merchants in the Guinea Trade, particularly…,” Honestus Mercator, July 1740.