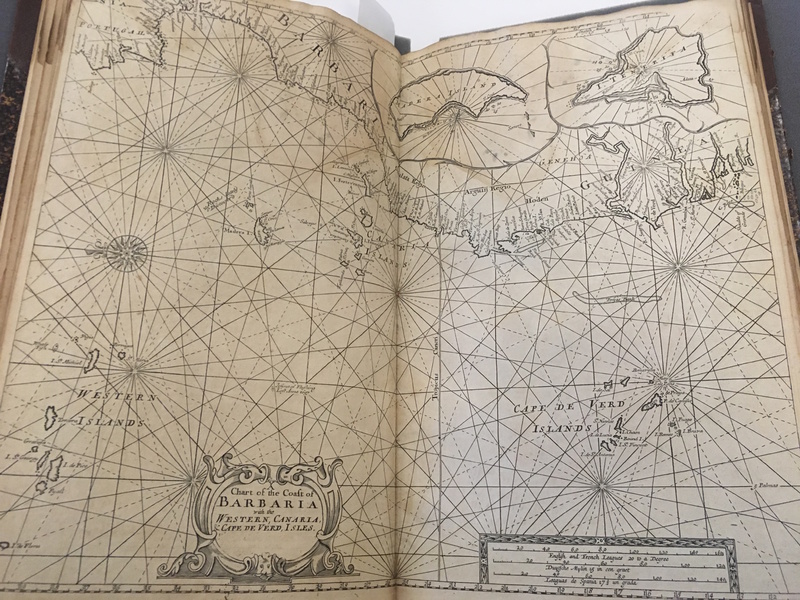 A map from an Atlas from 1720 named "The English Pilot" that gives navigation information and charts for sailors landing on the Barbary Coast and in West Africa. 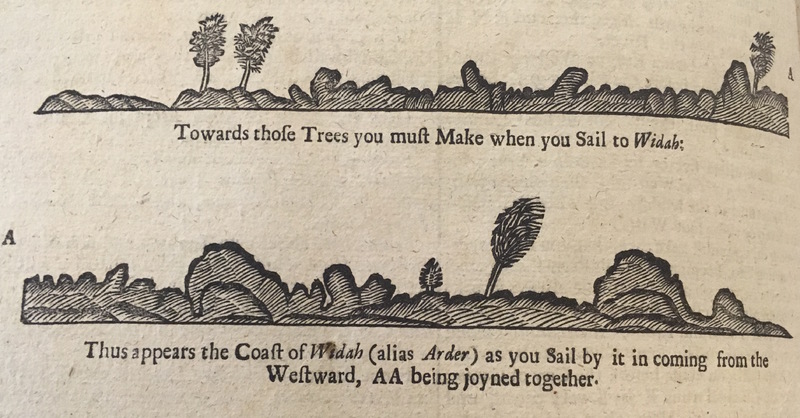 A page contained within "The English Pilot" that contains renderings of coastlines in several ports on the West African coast to help sailors recognize their location and land safely. 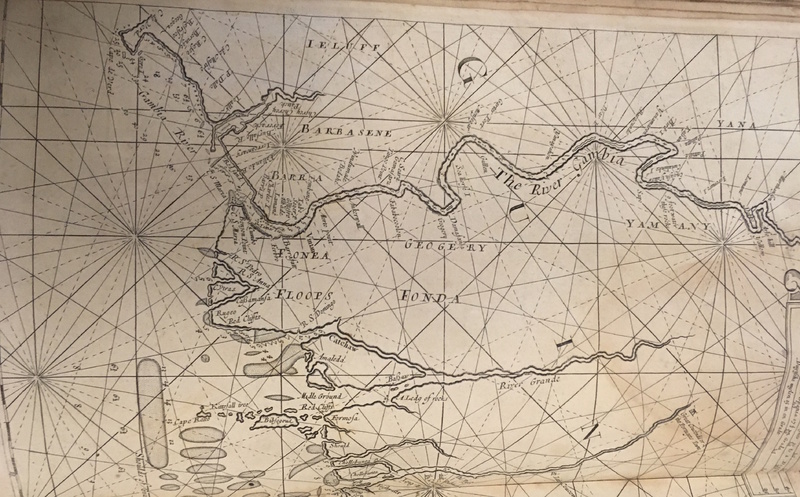 A map in "The English Pilot" showing the coastline of Senegal and inland tribes along the Gambia River.

This pamphlet is a cooperative effort between men from Barbados and London to publish an assessment of the ways that the acquisition of new North American colonies in the Seven Years' War will change the British slave trade and steps the British government should make to preserve its supremacy in the trade.

Senegal in the 18th century is better understood as a point in the shifting landscape of the imperial system rather than an easily demarcated region. The 1720 Atlas “The English Pilot” captures its spirit as a part of the colonial network because the crisscrossing wind lines on the map give it the appearance of being a small spot in the great web of empire. The various maps in “The English Pilot” that depict it show it among large swaths of the coast of West Africa or the entire length of the Senegal and Gambia rivers. The atlas also acknowledges the lack of construction and identifying markers along the coastline so it has included sketches of inlets and harbors to guide sailors.[1] Furthermore, descriptions of Senegal and its inhabitants are featured within larger discussions of West African possessions and the British Empire as a whole. All of this indicates that Senegal was far from the metropole; instead, it was a sparsely inhabited outpost on the edge of the massive and unexplored African continent. The repeated emphasis on Senegal’s place within a larger system illustrate that the empire was the primary object of study and each part is understood to be a cog within the larger machine.

So what was Senegal’s place in the imperial network? Primarily, it functioned as a mercantile hub that supplied North America and the West Indies with slaves and resources such as gold, ivory, and tin. For this reason, the region was hotly contested throughout the 18thcentury. One pamphlet published by the British Royal African Company in 1730 tells the history of its operations in West Africa dating back to the reign of Queen Elizabeth, and it frames the story as a centuries-long fight against the Dutch and the French for control of the region and its many resources. It chronicles the numerous claims by European powers on the coastline and the frequency with which they changed hands.[2] Senegal, when the British captured it in 1758, was hailed as a mercantilist victory: After raiding Fort Louis at the mouth of the Senegal River, British ships returned with loot from the region. Furthermore, control of the colony lowered prices in the British slave trade and gave British textile manufacturers crucial resources at a cheaper price than the one the Dutch offered.[3] The authors of the 1763 pamphlet “Considerations on the present peace, as far as it is relative to the colonies, and the African trade” celebrated the acquisition of Senegal because it would improve the British slave trade at the expense of the French one. They claimed, “the most valuable Negroes may be secured for the British planters, as the only means to prevent the growth of the French colonies.”[4] The British were not interested in Senegal as a spot for large-scale settlement, but rather a space to funnel resources into their imperial trade network.

The items in the exhibit reinforce Senegal’s place on the periphery of the British Empire both visually and thematically by underestimating the human experience of the region’s native inhabitants. Rarely do maps in “The English Pilot” depict anything beyond the coast of West Africa, and when they do it lacks clarity and detail. Furthermore, Africans function primarily as commodities in texts discussing the region, particularly “Considerations,” which almost exclusively focuses on slave bodies as spoils of war. Native voices are never heard, and even a study of the Senegalese people treats them as objects to be looked at from afar.[5] Senegal is one point of many in a powerful British Empire that spans the globe, and British merchants and leaders extract value from it through resources and slaves while ignoring the human realities of the region and its inhabitants.

[2] Royal Africa Company, The Case of the Royal African Company of England, (London: Printed by Sam Aris, 1730) 12. It should be noted that the pamphlet exaggerates the severity of conflict since it was circulated to petition Parliament to fund the construction and maintenance of forts on the West African coast. Nevertheless, the sheer number of conflicts and claims is significant and demonstrates the economic importance of the trade to British merchants.

[4] Robert Vaughan and Thomas Carney, Considerations on the present peace, as far as it is relative to the colonies, and the African trade, (London: Printed for W. Bristow, 1763) 22.